MEGRAME INTERNATIONAL WINDOWS AND DOORS IN A CENTURY OLD building 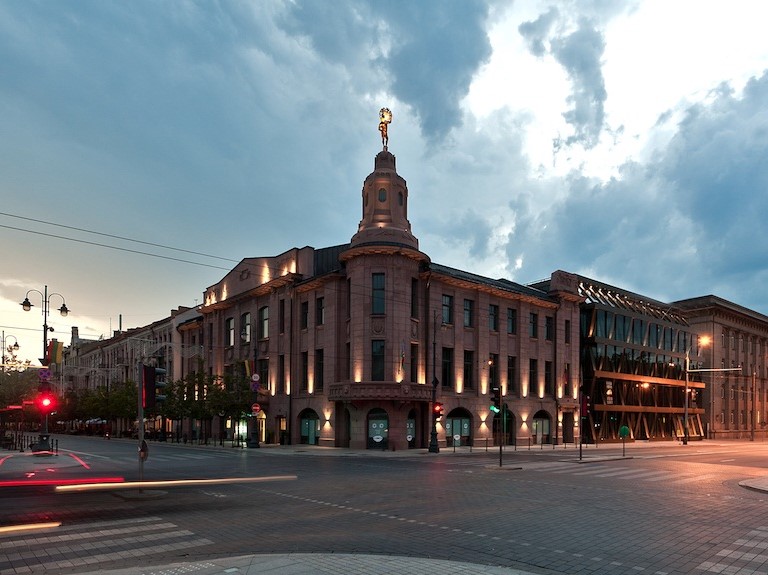 Posted at 14:11h in Company news by admin

The Merchants’ Club is located in Vilnius, Gediminas Avenue, near Lukiškės square. Built in 1913 by a contemporary public organization – the General Meeting of Trade and Industry with a purpose to represent the interests of the country’s businessmen, unify cherished business traditions, quality and refinement. The Community’s goal was to unite traders, companies and rich cosmopolitan residents of Vilnius.

The Merchants’ Club building housed shops, accommodated offices, a library, a bar and a canteen, meeting, concert, cinema halls and ballrooms. In 1933 the building of the Merchants’ Club has been reorganized into modern hospital. In 1947 Soviet Government has nationalized the building and has settled the Executive Committee of Vilnius. During all these years with the changing owners and purpose of the building the architectural heritage has been vastly destroyed. Therefore, while restoring the authentic Merchants’ Club building, the efforts were made to preserve as much of the heritage of the past as possible.

By choosing Megrame International architects of the historical Merchants’ Club have preserved the harmony of classics and modernity. To restore the authentic look of facade of the building, special old town profile windows with timber drip-rails and ornamental elements have been manufactured. All windows were equipped with special design handles and hidden window hinges. There were used only natural, durable and long-lasting materials of the highest quality to be a part of this historical object.

After the reconstruction, the Merchant‘s Club became a modern business center, offering premises for corporate and personal occasions. During the building renovation, Megrame International produced an original proportions wood windows, as well as internal doors. For the double facade system of the new annex were provided opening windows with ventilated spaces protecting against noise, controlling sunlight and heat, saving energy resources.